9 result(s) for your search
FiltresX

Since its creation in 1994, Energy transition and resilient cities have remained two of the FFEM’s priority action areas. These will be highlighted in 2021 through a number of international events, such as the UN Climate Conference (COP 26). To mark these occasions, the FFEM is publishing a
Brochure
Downloaded 24 times 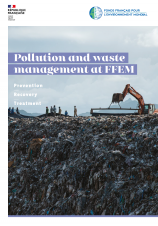 Since its creation in 1994, pollution and waste management has remained one of the FFEM’s priority action areas. This will be particularly showcased in 2021 through a number of international events, such as the World Conservation Congress and the UN Biodiversity Conference (COP 15). To mark these
publication
Brochure
Downloaded 36 times

Since its creation in 1994, international waters and aquatic ecosystems have remained two of the FFEM’s priority action areas. These will be highlighted in 2021 through a number of international events, such as the World Conservation Congress and the UN Biodiversity Conference (COP 15). To mark
publication
Downloaded 55 times

The publication, produced by the French Environment and Energy Management Agency (ADEME) in association with the FFEM and its Moroccan counterpart, AMEE, report on the progress made with regard to the financial backing provided by a number of international funding agencies for the Moroccan
publication
Downloaded 29 times

The French Development Agency (AFD) and The French Facility for Global Environment (FFEM) entrusted in 2012 Expertise France, the French international technical expertise agency, with the management of a 5 years project in the field of climate change in Africa: Africa4Climate
capitalization
publication
Downloaded 22 times

Burkina Faso: contributions of local NGOs in the conservation of natural resources

The capitalisation report was issued after the forum of local environmental protection NGOs held in Fada N'Gourma in September 2013, during which the issues of the governance of conservation areas, the economic promotion of biodiversity and the link between climate change/population resilience
publication
Downloaded 15 times

The report is the 3rd from the National Tropical Forests Working Group after those issued in 2003 and 2006. It reviews tropical forest issues arising among the French players concerned government administration, private sector, scientific circles, civil society groups in order to develop new
Brochure
publication
Downloaded 32 times

The mechanism called Reducing Emissions from Deforestation and Forest Degradation in developing countries (REDD+) was entered into the Cancun Agreement, validated by the 16th session of the Conference of the Parties to the United Nations Framework Convention on Climate Change (UNFCCC) in December
Brochure
Downloaded 20 times

Global Warming is the result of the greenhouse effect which in turn is due to an increase of GHG, especially carbon gas, in the atmosphere. In keeping with the guidelines of the United Nations Framework Convention on Climate Change, the FFEM encourages projects that reduce the consumption of fossil